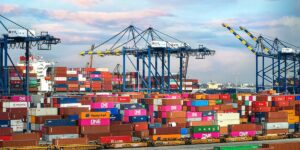 Hong Kong manufacturers are expecting to endure short-term pains caused by Shanghai’s coronavirus lockdown, but some are hopeful that a mid-May resumption of all port activity could help mitigate the impact.

Some businesses have resumed production in Shanghai under a “closed-loop” system, where workers are required to live on-site and maintain zero contact with outsiders while the city recorded increased death tolls and symptomatic cases.

The citywide lockdown of 26 million residents has been in effect since April 1, and authorities have yet to give a clear time frame for lifting the stringent measures.

“We’ve already factored in less business in the short run,” said Eugene Chan, managing director at the Hong Kong-listed capacitor maker Man Yue Technology and vice-president of the Hong Kong Young Industrialists Council. “If operations can return to normal by the middle of May, we can play catch-up between June and December.”

The spillover effect from Shanghai has affected Chan’s factories in the cities of Nantong and Wuxi – both in Jiangsu province. He said companies have had to rejig their production timetable and decide which projects go first, because they may not be able to get certain parts on time.

He also said that manufacturers have absorbed the higher marine costs in the period of slow transport, with cost increases ranging from around 10 to 100 per cent.

Dong Jinyue, senior China economist at BBVA Research, said that locking down China’s financial centre – a major manufacturing and transport hub – “has unavoidably had an adverse spillover effect on the whole economy, with supply-chain disruptions at home and abroad”.

Earlier this month, Dong said the Omicron flare-ups and Shanghai’s lockdown would make achieving China’s economic growth target of “around 5.5 per cent” for this year “very challenging”.

Paul Tai, regional director at global retail solution provider Mainetti Group and a general committee member with the Federation of Hong Kong Industries, also noted that a large number of products must be diverted from Shanghai to other ports in Ningbo or Shenzhen.

Oerations at his factories in Jiangsu’s Suzhou and Yangzhou have been affected, he added, and imports of materials, such as plastic hanger hooks from Switzerland, have also been delayed.

“It takes us two more weeks to get products out, and one more month to import goods, because changing ports also means different kinds of paperwork,” he said.

“Congestion in Chinese ports suggests that global shipping delays are likely to remain elevated throughout 2022, though they will remain below the highs seen in 2021,” she added.

Ambrose Linn, a former member of Hong Kong Logistics Development Council, also explained how Shanghai serves as a cargo-consolidation hub for manufacturers to transport their products via ships, trucks and trains.

For example, goods shipped by rail may start in Shanghai and then pass-through Chengdu, Central Asia, Siberia, Eastern Europe and western Europe.

“Transport isn’t stopping during the lockdown period, but it’s being delayed,” Linn said, adding that may result in large increases in storage costs and severe freight backlogs.