Today I am going to tell you about my first eye-opening inspection in China. To tell you shortly about my background, I come from a business school in Finland and currently doing my internship in China. My previous job experience includes mainly positions in the retail and insurance sector. Now, I am responsible of marketing, and basically all the consulting services we do for international trade are a completely new field for me, which makes this all super interesting.

There are a lot of activities that are involved in an inspection process – A lot of communicating, schedule arranging, price negotiating, requirement setting etc. is done before and after the inspection. I am not going to examine these points further, but open the experience of how the actual inspection on-plant is carried out.

So, I was told about the inspection on the previous day it would be done. Our Chinese inspector bought us train tickets to Shaoxing, where the factory is located and which is a 45 min train ride away from our office in Ningbo. As a foreigner in China, you cannot buy the tickets yourself from the Internet if you don’t have a Chinese bank account and read Chinese.

Our train departed for Shaoxing at 7. 45 am. The train stations in China are huge, you can compare them to airports in Western countries. They have gates from which to access the platforms 10 min before departure.

In Shaoxing, the manager of the factory came to pick us up from the train station. The first big difference between the Chinese and Western business life was noticed – We didn’t shake hands with the manager.

The ride to the factory took around 30 min. We were told that the manager of the trading company will also be coming to check the products. Though, he had missed the first train due to traffic jam, so we wouldn’t wait for him.

The inspected products were blankets. I did not quite know what to expect from the factory, but still for my amazement, it was a really small one! There was only one big room where all the cutting, sewing and packaging was done. The fabric for the blankets came ready from another manufacturer. 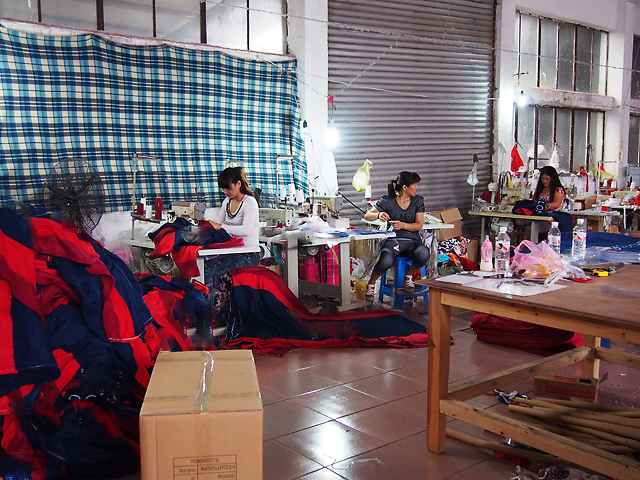 The workers were obviously quite surprised of seeing me, a foreigner, coming to the inspection. When I said I could speak a little bit of Chinese, they immediately started asking a lot of questions. All the workers were really friendly and hospitable. They seemed like a big family.

During the day, I basically observed, took pictures and helped the inspector with the inspection. I went with the factory’s manager to pick up the trading company’s manager from the train station. They preferred me to go along as I could help with the interpretation, even though my Chinese is still not that good.

For lunch, we went to a really fancy restaurant where we could pick up the food like in a buffet and then they would cook it for us. After lunch, we went back to the factory to carry on with the inspection.

In the afternoon, we came across with some misunderstandings and disagreements about certain defects of the product. Because of this, we missed our 4 pm train back to Ningbo. We had to take a taxi (which was really hard to get from the suburbs) to get back to the train station to buy the tickets to the next train. Finally, I was back home in Ningbo around 7.15 pm, which wasn’t so bad after all.

To conclude, I had a tiring, but yet very interesting day. I realized once again, how hard it would be as a foreigner to go alone to a factory if you cannot speak Chinese fluently or you don’t have an interpreter. Luckily in most cases, Chinese people are very friendly and nice.

For a foreigner, the distances in China can sometimes totally surprise you. The company being located in the same city can in reality mean sitting in the car for 2 hours. This time it wasn’t as bad.

The disagreements between the parties involved are not commonplace, but I think some of them could be avoided if all the parties would acknowledge the cultural differences. Chinese people constantly avoid saying “no”, so you just sometimes have to bear it and have enough patience to ask the same question in a few different ways.

Have you ever visited a factory in China?