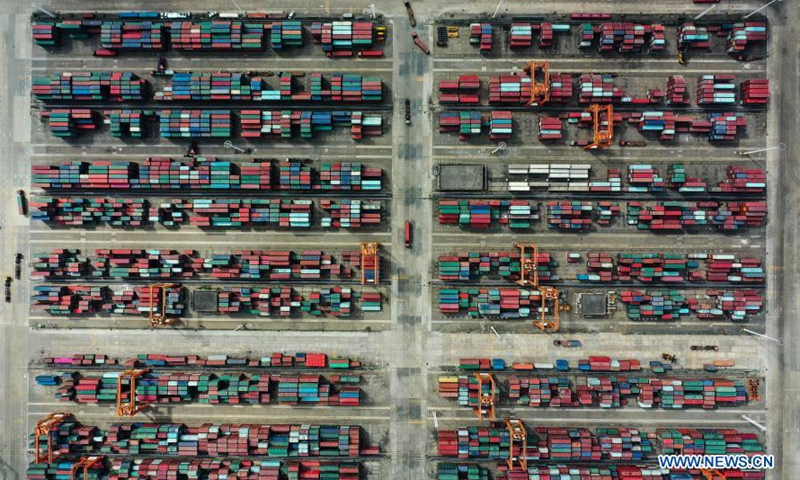 With the signing of the Regional Comprehensive Economic Partnership (RCEP), upgraded China-ASEAN Free Trade Agreement and upcoming visits by four foreign ministers of ASEAN countries to Beijing, China and ASEAN are set to expand their economic and trade cooperation.

Officials, analysts and companies expect broader cooperation between China and ASEAN, including trade, high-tech cooperation and the restructuring of industry chains.

At the invitation of Chinese Foreign Minister Wang Yi, the foreign ministers of Singapore, Malaysia, Indonesia and the Philippines will visit China from Wednesday to Friday. Foreign Ministry spokesperson Hua Chunying said China hopes to reach new heights in bilateral relations and China-ASEAN relationships through the visits.

"Future cooperation between China and ASEAN will focus on trade in goods and services, investment, production capacity and construction of cross-border industrial parks. Specifically, cross-border e-commerce and direct investment in mining and manufacturing sectors may be the focus of cooperation," Hu Qimu, chief researcher at the Sinosteel Economic Research Institute, told the Global Times on Wednesday.

Trade between China and ASEAN reached 4.74 trillion yuan ($722.8 billion) in pandemic-hit 2020, up 7 percent on a yearly basis, according to statistics from Chinese customs. China and ASEAN are each other's biggest trade partners.

"China is the biggest consumption power in the region, making it the target market of ASEAN, especially during the post-COVID-19 period, when the US and EU markets are struggling," a Shanghai-based independent investor surnamed Cheng, told the Global Times on Wednesday.

Chinese Deputy Commerce Minister Qian Keming said at the China Development Forum 2021 on March 22 that China needs to import more than $2 trillion in goods and $500 billion in services each year, which indicated that China will be a bigger market for its partners.

Glenn Penaranda, special trade representative and commercial counselor at the Embassy of the Philippines in Beijing, told the Global Times on Wednesday he expected bilateral trade will continue to grow.

He noted that China remains the top trading partner for the Philippines - the largest export market and largest import supplier. In terms of investments, China was the country's No.2 investment partner in 2020, particularly in infrastructure and manufacturing.

"From traditional trade relationships, enterprises are now pursuing collaboration in research and development, the development of standards, technology sharing and joint production and marketing projects," Penaranda said, adding that companies from China and the Philippines could achieve more collaboration in services trade.

Nick Koay, chairman of the Malaysian Chamber of Commerce and Industry in China, Greater Bay Area, said he expected China and Malaysia could have further cooperation in the semiconductor sector while a global chip supply crunch disrupts industries from auto-making to electronics.

For instance, the chambers of commerce in both countries and the Malaysian Ministry of International Trade and Industry will hold an event in South China's Guangdong Province later this year to promote the advantages of both countries in developing semiconductors, Koay told the Global Times on Wednesday.

"For Chinese companies that have been hit by tariffs arising from China-US trade friction, they are welcome to consider setting up factories in Malaysia, shortening the supply chain and expanding to wider markets in ASEAN," he said, noting that some Malaysian firms look forward to bringing their products to the world via China's burgeoning cross-border e-commerce platforms.

But Cheng said that in the short term, China-ASEAN trade will still be dominated by agricultural products and low-end manufacturing.

"China and most of the ASEAN nations are developing countries, which are basically evolving from agricultural producers to industrial manufacturers.