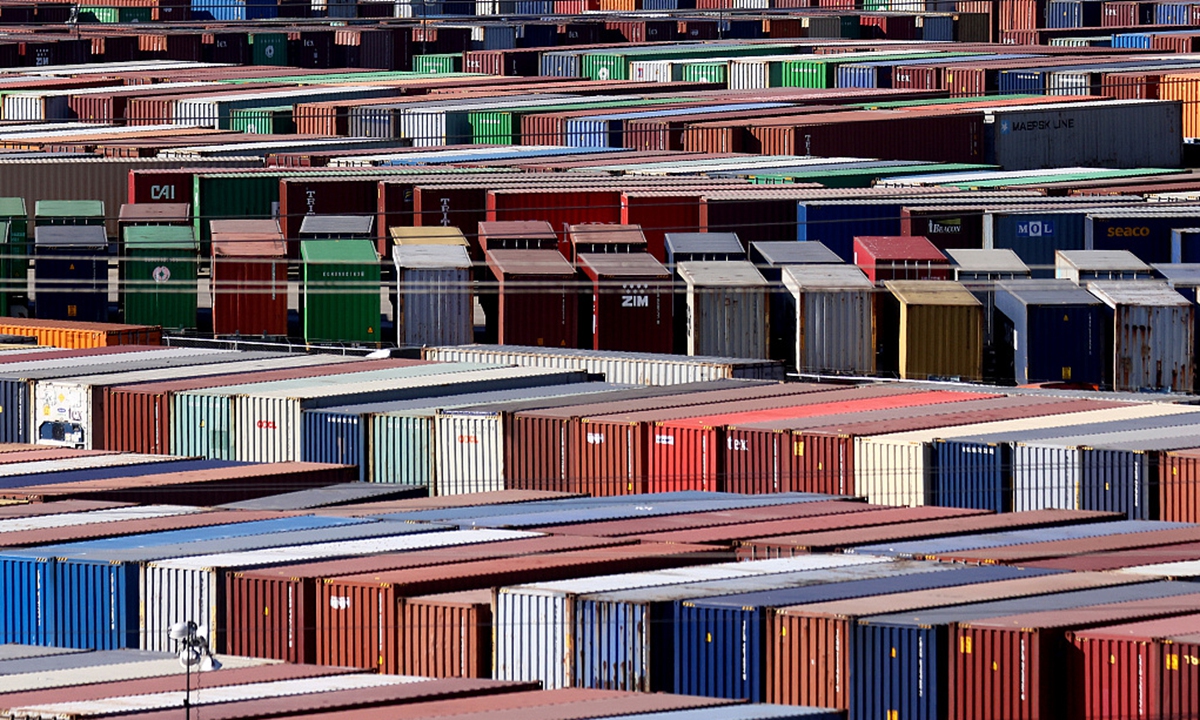 If the US port congestion problem is not alleviated in the two months after the Chinese New Year in 2022, or by the peak export season which arrives in second half of the year, US port congestion may become more serious, and it will not be fundamentally alleviated even by the end of 2022, Han Jun, an analyst from China Securities told the Global Times.

The probability of global shipping returning to 2019 levels before the emergence of the pandemic, is considered to be extremely low across the industry, he added.

Zhong Zhechao, founder of One Shipping said that the global supply chain remains under considerable strain, and the industry's pessimistic expectations for shipping have been extended out into 2022, or even 2023.

Global shipping suffered in 2021, with the Suez Canal blocked in March, followed by two major ports of South China's Shenzhen and East China's Ningbo partially closed due to localized COVID-19 outbreaks in May and August, later exacerbated by US port congestion which began to escalate in July.

Consumers across the global have felt the direct effects of shipping congestion in the form of sharp increase in freight costs. If the buyer does not share these costs, we will lose money, then we can only cancel the order, otherwise the more exports, the more we lose, Zhang Shuang, from Yiwu, one of the world's largest small commodity trading hubs in East China's Zhejiang Province told the Global Times.

The head of a shipping agency surnamed Yang told the Global Times that although the pandemic is still spreading in 2021 and the efficiency of international transportation capacity is declining, trade between China and the US is still growing, placing pressure on already stretched container management systems.

"I have been rushing to grab containers for a year, otherwise the goods parked in the warehouse will not be able to be packaged and shipped out," he said.

The chaos across global shipping has also directly affected the global production.

Market insiders told the Global Times that the price of global fertilizer rose sharply in 2021, especially nitrogen fertilizers. One of the key reasons is the Panamanian-flagged vessel Ever Given becoming stuck in Suez Canal in March, impacting shipping dates for natural gas, raw material for global nitrogen fertilizer production, scrambling production dates for various Asian producing countries, and sharply pushing up prices.

In May, an acute shipping backlog occurred at Yantian Port in Shenzhen. While in August, Ningbo Port also shut down operations due to an outbreak of COVID-19 cases. These local incidences have global repercussions when it comes to the tightly coordinated worldwide shipping industry.

From Ningbo Port, it is usually possible to reach the US West Coast in less than a dozen days, but given the current logjam, unloading a ship can take up to 10 days.

Because of the pandemic, the US' dependence on Chinese goods has increased and strong demand has caused a larger volume of Chinese goods to be shipped to the United States.

Yang told the Global Times that the demand for Chinese goods in the US has risen sharply during the pandemic, especially common household items.

Data from China customs also shows that over the first 11 months of this year, China's exports to the US increased by 28.3%, exceeding the total value of imports and exports for the entirety of 2020. Recently in November, the US surpassed ASEAN and the European Union to become China's largest export destination.

The arrival of large quantity of cargo being warehoused at US ports poses a severe test for processing capabilities of port operators and logistics firms, creating a situation in which docks and container facilities are overflowing while supermarket shelves, in contrast, are often bereft of essential goods. As a remedy, the US government has forced major ports to extend operations to 24 hours per day.

Transporting goods from the waterfront to shops or inland warehouses has also become a significant challenge.

An analyst Wu Yifan from Huachuang Securities said that the transportation conundrum in the US has gradually extended from the front-end terminal to the back-end, with a critical labor shortage placing significant pressure on each link in the logistics chain, including setting collection and delivery timetables.