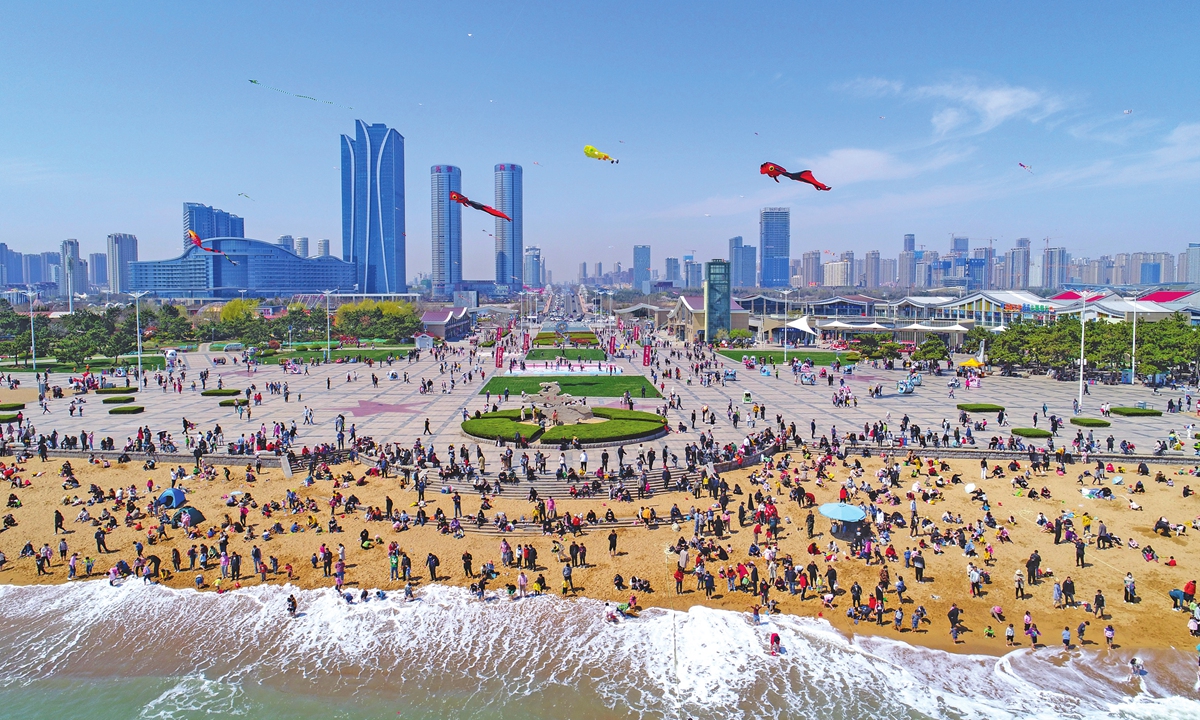 China's consumption is firing on all cylinders including tourism and box office in the three-day Qingming Festival holidays to a level that is approaching, or even surpasses that of 2019, industry practitioners and companies said, as Chinese consumers rushed to unleash their spending desires after the country lifted restrictions on people movement due to successful control of the resurgence of the epidemic.

Spending sprees, such as dining, moviegoing, travel and other leisure activities erupted after the country swiftly brought the resurgence of epidemic of last winter under control.

Consumption had already flared up during the 2021 Spring Festival holidays with spending boom in certain areas like the movie box office, although general consumption was still subdued then as many people were requested by authorities to stay put amid a resurgence of the epidemic.

Experts have seen the holiday spending boom as an epitome for China's post-epidemic consumption recovery, which they attributed to mixed factors such as "retaliatory spending", manufacturing recovery as well as the government's efforts to secure employment. They also predicted that the consumption hike could push China's GDP to a growth rate of more than 8 percent in the second quarter. 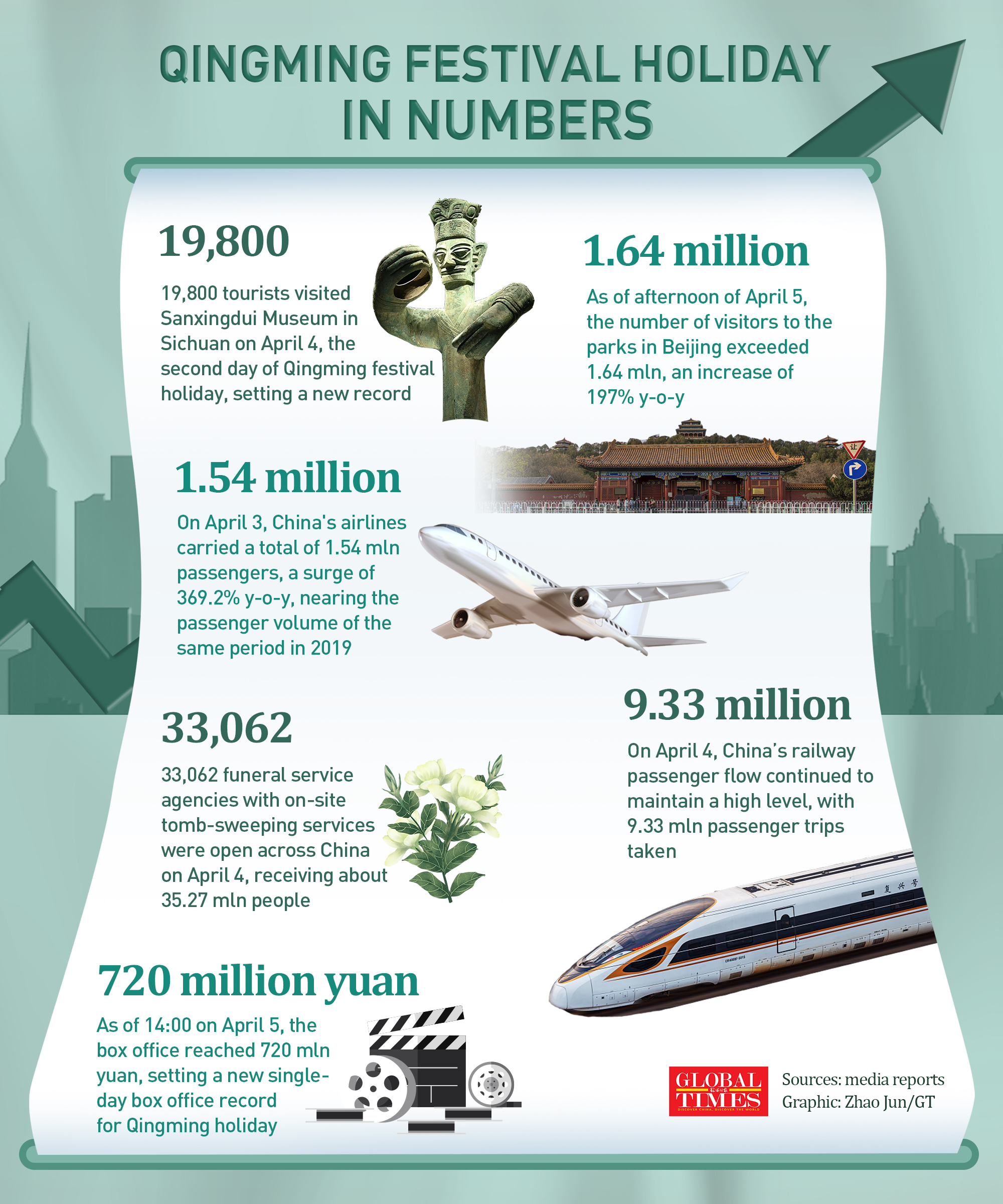 With the epidemic resurgence in several places in the country last winter being successfully brought under control, China's economy is rolling ahead with such strong momentum that it has pushed many consumption sectors to a level that is approaching or even surpasses the scale in 2019. The tourism sector, for example, is an area where such a strong recovery is taking place. According to the data of the Ministry of Culture and Tourism, 102 million domestic trips were made during the festival, an increase of 144.6 percent year-on-year and a recovery to 94.5 percent of the same period before the COVID-19 epidemic. Domestic tourism revenue reached 27.168 billion yuan, up 228.9 percent year on year, and recovered to 56.7 percent in the same period before the epidemic.

A report sent by Chinese tourism agent China Spring Tour to the Global Times pointed toward a similar trend. In March 2019, the company only sent one tourist group to Northwest China's Xinjiang Uygur Autonomous Region. This year, they sent eight groups. Likewise, the number of tourists that were organized by the company to visit Linzhi, Southwest China's Tibet Autonomous Region during this year's local peach flower festival has surged by nearly 15 percent compared with 2019.

Zhou Weihong, the company's deputy general manager, said that their company's tourist flow during this year's Qingming Festival holidays is "similar" to the year of 2019, but she wouldn't compare the figures with last year because it was "many times higher."

"Although the pandemic's blow to the Chinese tourism industry has been a little more enduring than we originally expected, but we also feel that the industry's recovery is evidently speeding up," she told the Global Times on Monday.

Data provided by Chinese tourism service website qunar.com also showed that during this year's Qingming Festival holidays, ticket bookings on the website were 1.4 times more than 2019, while hotel bookings were 1.5 times higher compared with 2019.

A Shanghai resident surnamed Qi who traveled to Southwest China's Chongqing said that this is the first time in three months that she has traveled. "I didn't travel during the Spring Festival holidays so I want to take a trip during the Qingming Festival. Besides, since the epidemic has been brought under control, I think it's very safe to travel at this time," Qi told the Global Times.

She also noted that in Chongqing, tourist crowds were very dense, and it generally took more than two hours to wait in queues for a boat or a famed restaurant at local tourism sites.

Besides tourism, the movie industry also saw a strong rebound during the holiday. By the end of 12:56 noon on Monday, this year's Qingming Festival movie box office surpassed 700 million yuan ($107 million), breaking the previous record of 641 million yuan set in 2019.

In Beijing, 100 monitored consumption sites including supermarkets and restaurants earned 2.15 billion yuan of sales revenues for this Qingming Festival holidays, up 12.6 percent year-on-year and up 6.4 percent compared with the corresponding period in 2019.

Behind the booming consumption is China's strong and effective epidemic control measures, including taking urgent measures to wipe out random COVID-19 breakouts in certain regions and vigorous promotion of COVID-19 vaccines. By Saturday, nearly 137 million COVID-19 vaccines have been administered in China in total.

Experts said that China's consumption market has recovered close to the pre-epidemic level in 2019, if not yet witnessing a complete surpassing.

"China's consumption revenues should have more than doubled during this year's Qingming Festival holidays compared with 2020, when many industries remained idle or closed due to the virus outbreak," Hu Qimu, chief researcher at the Sinosteel Economic Research Institute, told the Global Times.

He attributed the rebound to the country's manufacturing recovery over the recent months which has increased people's income, as well as retaliatory consumption, particularly in travel and tourism, as a result of suppressed demand during Spring Festival holidays.

Zhou from China Spring Tour also said that the peak of the tourism recovery is yet to come, as she anticipated that tourism volume during this year's May Day holidays would surpass that of 2019.

Experts also noted that the booming consumption during Qingming as well as the upcoming May Day holidays could help boost consumption in the second quarter by enhancing market confidence, which would in turn add momentum to economic growth.

According to Hu, the consumption growth in the Qingming Festival holidays would "send a signal to the market" about the trend of consumption and economic recovery, which would enhance people's expectations that the consumption sector would further grow.

"China's consumption market will continue its recovery as the government focuses on securing employment, and as tax cuts continue to be in place, which will increase residents' income as a result," Hu said.

He anticipated that China's consumption revenue would grow by about 50-80 percent during the second quarter, while total GDP could rise by around 10 percent.

Wu Chaoming, chief economist at Chasing Securities, said that problems stemming from an economic imbalance have protruded after the epidemic hit, as some micro businesses have not weathered the storm. But such an imbalance would gradually ease with the general economic recovery, and during that process, the consumption market will also gain momentum to rise further.

He predicted that China's second-quarter GDP could grow by about 8.5 percent, with the consumption sector being the biggest contributor.