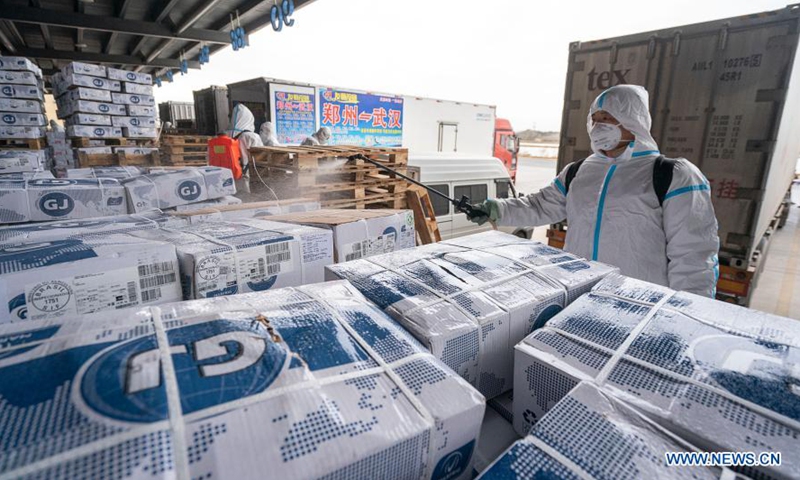 In wake of new coronavirus cases in some Chinese cities and serious outbreaks in some parts of the world, officials from various cities have in recent days moved to strengthen supervision of imported frozen food to stem the spread of the COVID-19, according to media reports and industry representatives on Sunday.

However, despite strict quarantine and inspection measures for imported cold-chain food, China's imports of frozen food are gradually recovering as the epidemic remains generally under effective control in the country and the inspection process has become more efficient, industry representatives said. A full recovery could be expected in the first half of 2021, they noted.

The new measures came after coronavirus has been found on the outer packaging of three seafood samples in a routine sampling inspection of imported cold-chain food in Rizhao. All of the 26 tons of cold-chain food, from which the sample was drawn, have been withheld from sale, the report noted.

Authorities in Dalian, Northeast China's Liaoning Province, also took measures to track cold-chain food circulation in Dalian and Yingkou to ensure that every batch of imported frozen products undergoes a nucleic acid test, and every product is disinfected.

"The quarantine and inspection process for imported cold-chain food now is as strict as during the 2020 winter," a Guangzhou-based cross-border logistics agent surnamed Wu told the Global Times on Sunday.

According to Wu, imported goods along with containers must undergo nucleic acid tests together at customs. If they don't pass the tests, the products could be destroyed immediately. The quarantine and disinfection process could last up to 10 days, Wu said.

Liu Haibo, a Shandong-based seafood importer, said that although the efforts are still strict, there have also been some adjustments.

For example, in the past, if one batch of goods tested positive, the whole batch of goods would be held for destruction. Now, it is a matter of sampling the defective ones and dealing with them separately instead of detaining them all, he said.

"Also, the customs process is much faster than before. The whole customs clearance process at the end of last year took more than 20 days, but now it only takes 10 days on average," Liu told the Global Times.

According to Liu, imports of frozen food are recovering with control of the pandemic, although consumer confidence still needs time to recover to the normal state.

"Our imports currently stand at about 600 tons each month, about 20 percent of last year's level," Liu said, adding that they are still working through last year's inventory.

He predicted that a full recovery of imports will not take place until about the first half of next year. "We are very cautious about increasing imports, as the situation in India and other countries is still serious," he said.

"Many people in the frozen-food importing business I know have opted out of it because of coronavirus uncertainties. They can't handle the loss if contaminated products are detected suddenly," he said.