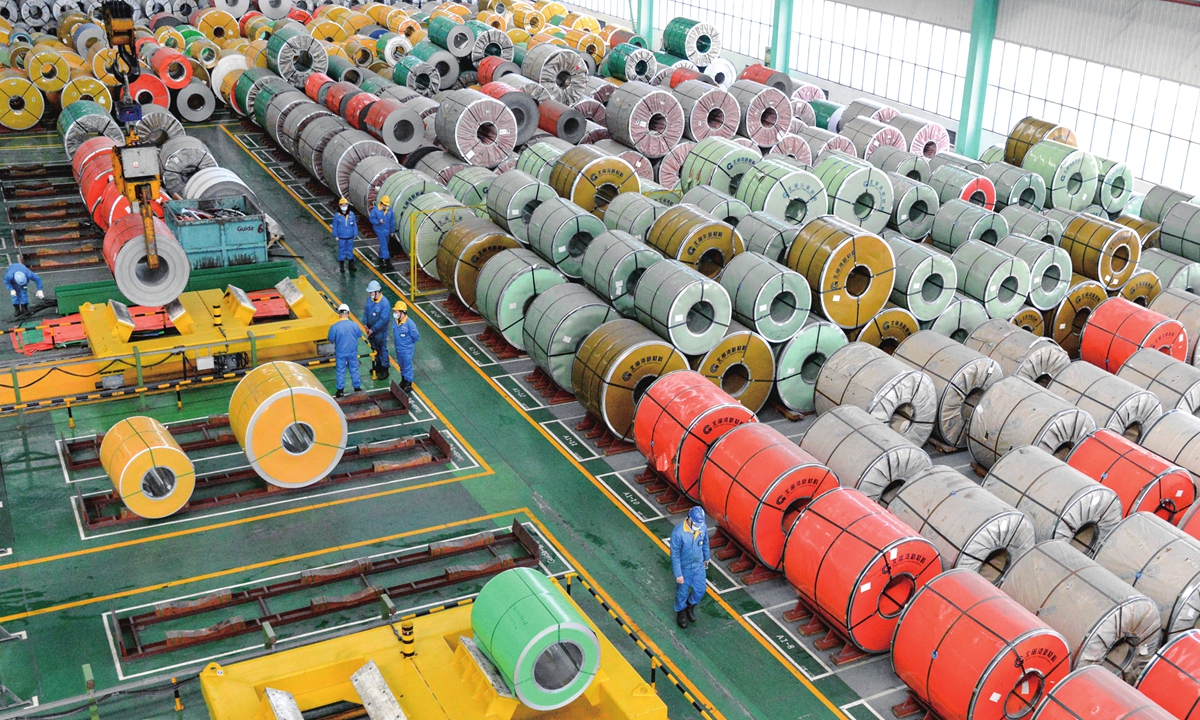 Surges in bulk commodity prices are putting pressure on China's manufacturing sector, pushing authorities and industry participants to seek plans to stabilize the market to fend off potential disruptions and risks.

The price of staple commodities such as copper, aluminum, steel and other manufacturing raw materials have jumped significantly this year, with futures prices increasing over 50 percent compared to the same period last year and spot prices also seeing double-digit growth.

Specifically, steel prices have been repeatedly setting new highs during the same period, according to the China Iron and Steel Association.

Many factors are driving up bulk commodity prices: the US government's money-printing and bailouts for its faltering economy, rising global orders, and market speculation, experts said, noting that there is no sign of relief soon.

The price increases are likely to continue at least until mid-year, Hong Shibin, deputy executive director of the marketing committee of the China Household Electrical Appliances Association, told the Global Times on Monday.

Several industry insiders on the downstream end of the manufacturing sector told the Global Times on Monday that the price jumps are having a significant impact on their operations, further narrowing their profit margins.

For the home appliance industry, although this is usually the low season in China, instead of giving discounts, several large producers are hiking prices because of the rising input costs.

Price hikes started late last year across a wide range of home appliances and other commodities, with increases of 5-10 percent or even more, data showed.

"Companies can hike prices as their costs go up, but this trend cannot last for long. After all, the end price is subject to contracts and other factors, which cannot be changed quickly," said Hong.

The price of strip steel, for example, surged from 4,230 yuan per ton in February to a peak of 5,620 yuan per ton in April, while the operating cost per ton has surged 30 percent since February.

Du said that the company doesn't really have a strategy to deal with this situation and is losing money as a downstream processing company.

Some companies have made contingency plans. A source at a large electronics production company in Central China's Hubei Province told the Global Times on Monday that the costs of material are up about 20 percent, but that's bearable at the moment.

"We have increased our prices only a bit because we have some stockpiles of basic materials," said the source, and the company is also cutting production costs.

High prices are drawing many new players into the steel sector. Data from market information online platform Qichacha showed that there are 18,000 steel companies in China, with 2,888 registered in 2020 and another 930registered in the first quarter of 2021 alone.

With higher prices in the spotlight, the China Iron and Steel Association and other departments will hold an iron ore market research forum on Tuesday.

But instead of discussing soaring steel prices as some media reports assumed, a source with the association told the Global Times on Monday that this will be an internal meeting and the main agenda is to cooperate with relevant departments to investigate the market situation.

Experts said that prices could reach a turning point soon.

Demand is only part of the reason for the soaring prices, since many downstream firms are buying less, Ge Xin, a senior analyst with Beijing Lange Steel Information Research Center, told the Global Times on Monday.

A recent meeting by the State Council Financial Stability and Development Committee paid particular attention to the trend of staple commodity prices and addressed the need to keep prices basically stable, according to a report from www.ce.cn on Monday.

China is reducing the expansion of unnecessary infrastructure and pushing steel industry participants to transform, which will also help to rein in prices over the longer term, said Ge.