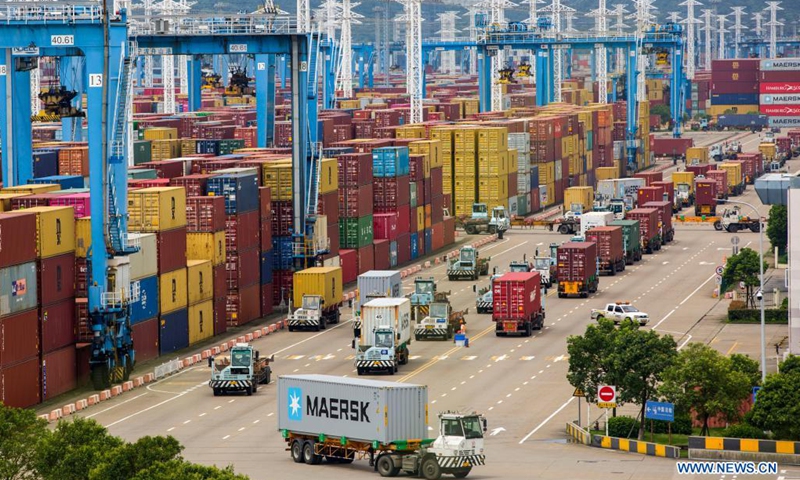 Operations in the Meishan bonded area in Ningbo, East China's Zhejiang Province returned to normal on Wednesday, two weeks after the suspension of Meishan wharf at the Ningbo Zhoushan Port due to a resurgence of COVID-19 cases.

Analysts stated that China is at the forefront of the world in the efficient handling of emergency suspensions or temporary closures of ports without causing significant backlogs or severe "traffic jams" of cargo ships.

The impact of the recent outbreak at the Meishan wharf on the global supply chain was kept at a minimum, said Jiang Yipeng, deputy general manager of Ningbo Zhoushan Port, at a press conference on Wednesday.

The smooth operation was achieved by adjusting routes, berthing paths and cargo sources promptly, and arranging relevant operations to other ports, according to the press conference.

From August 18 to 12 am on Wednesday, three ships carrying wheeled cargos and 10 container vessels left their berths, and five container vessels completed berthing operations, with 29,000 TEU of containers and 2,526 cars handled, while the Meishan wharf gradually resumed production.

Ports in China have established advanced systems and emergency measures that guarantee ports can resume normal operations despite emergencies as efficiently as possible without containerships jamming the ports, Wu Minghua, an independent shipping industry analyst in Shanghai, told the Global Times on Wednesday.

Wu noted that China has been handling closures of ports under emergency conditions much more efficiently than the US and some other countries. Ports in the US and some European countries have had to make significant reductions in operating rates -- sometimes by even more than 50 percent -- due to a lack of labor amid the epidemic, resulting in massive pile-ups of cargo and blockages of cargo ships.

Containerships are stacking up again off Southern California's ports, with 37 vessels anchored near ports in Los Angeles and Long Beach in recent days -- the highest number since February, the Wall Street Journal reported on August 17.

West Coast congestion is being caused by strong US consumer demand, and lack of workers and equipment due to pandemic-related health and safety measures.

Wu added that there might have been cargo backlogs and ship delays when operations of Chinese ports were suspended at the beginning. However, ports in China caught up quickly through various means, such as relocating operations to nearby ports.

"The congestion in European and American ports will have an impacts on Chinese ports, as ports around the world are connected under globalization," said Wu.