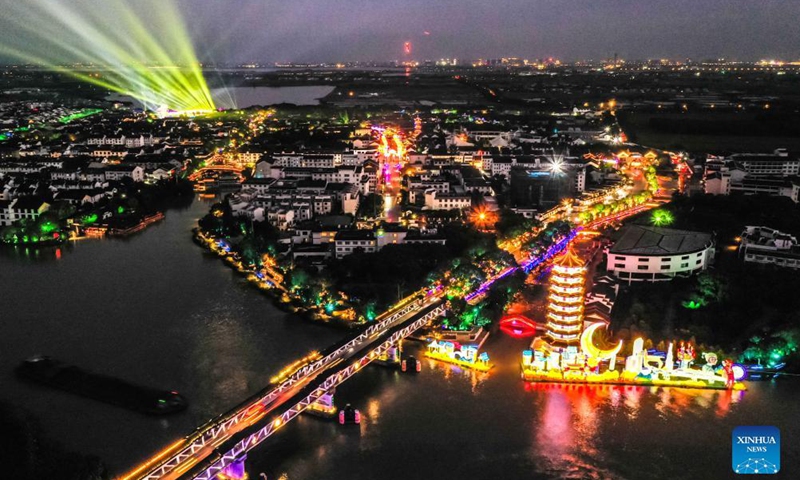 As this year's three-day Mid-Autumn Festival holidays drew to a close on Tuesday, spending data - especially tourism and the box office - again took the spotlight as a measure of China's economic resilience.

A total of 88.16 million domestic tourist trips were made nationwide during this year's holidays, equivalent to 87.2 percent of the 2019 level, according to statistics from the Ministry of Culture and Tourism on Tuesday.

The number stood at 105 million in 2019, and 97 million domestic tourists traveled on October 1 in 2020, which was also the first day of the Mid-Autumn Festival holidays.

Domestic tourism revenue reached 37.15 billion yuan in 2021, recovering to 78.6 percent of the 2019 Mid-Autumn Festival holiday on a comparable basis.

In 2019, the box office for the Mid-Autumn Festival totaled 803.9 million yuan ($124.4 million). As of 5 pm on Tuesday, it was more than 450 million yuan, according to professional box office data providers.

"This year's Mid-Autumn Festival tourism and consumption data basically recovered to the level in 2019 - the pre-COVID-19 period. As the Mid-Autumn Festival fell on October 1 in 2020, which was also the National Day holiday, last year's statistics are not comparable with this year's," a travel analyst surnamed Huang told the Global Times on Tuesday.

Huang added that "from the current box office and travel data, the overall consumption is on a solid upward trend."

Huang noted that tourism over the National Day holiday in 2021 will probably exceed expectations, as pandemic prevention has become part of daily life and COVID-19 is no longer "the sword of Damocles" in view of China's effective control measures.

Many people may not have traveled during the Mid-Autumn Festival holidays, but they chose instead to wait for the golden week of the National Day holiday, which also affected Mid-Autumn consumption, Huang added.

Stores in Nanluoguxiang, the most popular and one of the oldest hutongs (alleyways) in Beijing, saw the number of customers during the holidays increase by 60-100 percent, compared with normal weekends in 2021.

But consumption of goods, beef for example, saw an increase of 30 percent from the previous month in a supermarket in Beijing, which restocked two to three times a day during the festival.

The negative impact of the epidemic and the pressure of rising commodity prices are both expected to gradually ease during the fourth quarter, with August likely to be the low point for the year, Citic Securities said in a report on Tuesday.

China has accumulated experience in opening domestic tourism despite some COVID-19 outbreaks over the past year, and the number of vaccinated people has been growing, so local outbreaks did not affect the enthusiasm of tourists in other provinces and regions, Song Ding, a research fellow at the Shenzhen-based China Development Institute, told the Global Times on Tuesday.

"Domestic travel for the Mid-Autumn Festival and the October 'golden week' remains normal. except for provinces that have recorded several COVID-19 cases," Song noted.

Hotel orders from tours in the peri-urban areas in 2021 increased by more than 20 percent compared with 2019, with ticket bookings surging by nearly 30 percent and car rental orders up by 77 percent, the report said.

Song said that a large number of tourists chose to travel within a relatively short range during the three-day festival.

Consumers between the ages of 26 and 35 continued to make up the majority of travel orders for the Mid-Autumn Festival in 2021, accounting for 45 percent of total bookings, according to a report by online travel agency Tuniu.

This group is mainly composed of singles with strong purchasing power and post-1980s families with a certain economic foundation, Tuniu said, adding that their demand for travel is highly consistent, and it emphasizes individuality, customization and high quality.

I have been examinating out many of your stories and it’s pretty good stuff. I will definitely bookmark your website.