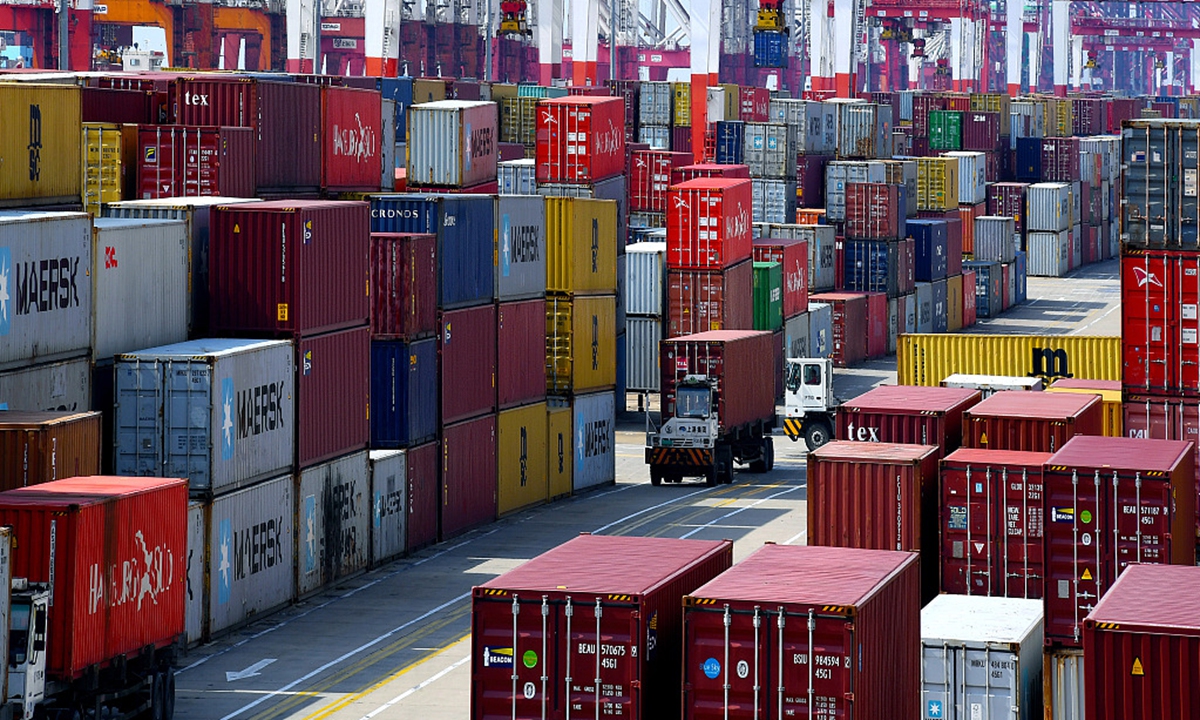 Many US politicians have been pushing for an economic decoupling from China, but latest trade data shows that the two biggest economies remain strong in terms of trade despite tense bilateral relations, showing the failure of the US' decoupling efforts, Chinese analysts said on Sunday.

As bilateral trade continues to grow and US companies are seriously hurt by tariffs imposed by the US government, Washington may be forced to roll back tariffs, which would mark the ultimate failure of the US tariff war, the analysts noted.

According to statistics released by the Chinese customs on Saturday, China's trade with the US surged by 40 percent year-on-year to $404.6 billion in the first seven months of 2021. China's exports to the US surged by 36.9 percent in US dollar terms, while imports from the country hiked by 50.4 percent. Currently, the US is China's third largest trading partner.

While the growth may have been boosted by a economic recovery in the US, the solid figures also reflected the fact that the US cannot replace Chinese products from electrical appliances to toys, said He Weiwen, a former senior trade official and an executive council member of the China Society for World Trade Organization Studies.

"This shows that although the US government has increased tariffs trying to cut US imports from China, it is of no avail. The tariffs don't work in punishing Chinese companies; they are ridiculous," He told the Global Times on Sunday.

He went on to predict that given the current trend, China's trade with the US might exceed $540 billion in the whole year of 2021, which will be the highest level in history.

Gao Lingyun, a trade expert at the Chinese Academy of Social Sciences in Beijing, also said that China's economic ties with the US have always been close, even with external obstructions like the pandemic and tariff hikes.

"The US has tried to force the industrial chains to move out of China, but the measures have been ineffective. Instead, the pandemic has caused domestic capacities to increase with China's successful control of the coronavirus and complete industrial categories," he told the Global Times.

Gao also said one reason behind surging imports is that China has been speeding up efforts to implement the phase one trade deal. "China is carrying out the deal without any delays," he said.

As China-US trade is expanding, the US government is also under increasing pressure to remove barriers set by the Trump administration. According to a Bloomberg report, more than 30 US trade groups recently urged the Biden administration to resume trade negotiations with China and remove tariffs.

Representatives from the groups, which include the US Chamber of Commerce and Semiconductor Industry Association, have written a letter to Treasury Secretary Janet Yellen and Trade Representative Katherine Tai, in which they said that the increased tariffs have inflated US companies' manufacturing costs and made US products and services less competitive abroad.

They also called on the US government to reduce the import tariffs in "immediate steps" to relieve increasing inflationary pressure and rising prices for Americans.

Gao said that the tariffs have caused a hike in importing prices, which added to the country's rising inflation.

"Once the inflation is clearly sensed by consumers, it is very bad for the elections… I think both Chinese and US officials have realized the importance of China-US cooperation. Although signals are not clear, it's possible that the US government is paving the way for further measures, such as excluding more products out of the tariff lists," he said.