China’s economic risks are building in the second half of the year, with growth set to slow while inflation pressures are picking up, clouding the outlook for central bank support.

A report Monday showed factory-gate inflation surging again to 9% in July as commodity prices climbed, while core consumer prices -- which strip out volatile food and fuel costs -- rose the most in 18 months.

At the same time, the spread of the delta variant is threatening China’s outlook, with Goldman Sachs Group Inc. and JPMorgan Chase & Co. downgrading growth forecasts for the third quarter and full year, and predicting more central bank easing. 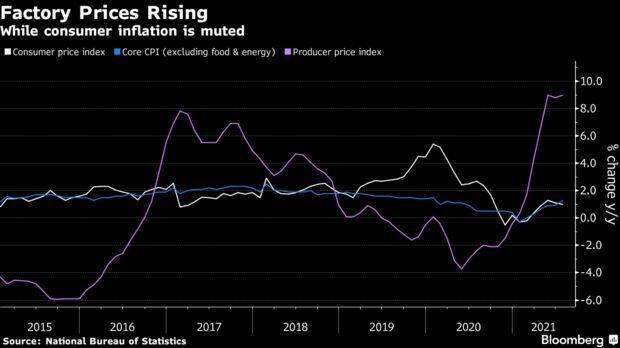 The latest developments are another complication for policy makers, who have already pledged fiscal and monetary support for the economy in the second half of the year. While some economists see inflation risks limiting the room for central bank action, many view the uncertain growth environment as a bigger worry, with more easing likely to come.

“As the outbreak unfolds, China’s domestic demand will weaken, and the overall inflation pressure will decline,” said Xing Zhaopeng, senior China strategist at Australia & New Zealand Banking Group Ltd. “Even though prices are still high, they won’t have much momentum to rise further, so it won’t create a huge constraint on monetary policy.”

Chinese government bonds extended losses after the data, with the yield on the 10-year security rising 4 basis points, the most since January, to 2.85%.

The People’s Bank of China said late Monday that the surge in PPI “is most likely temporary” and the domestic recovery “is not yet solid.” Inflation pressure is “controllable” because the central bank began normalizing money supply since May 2020, ahead of major economies, it said in its second-quarter monetary policy report.

Exports may slow because of comparisons with a higher base from a year ago, while investment growth in some areas remain weak and consumer industries like catering and tourism haven’t yet fully recovered, the central bank said. It pledged to keep monetary policy prudent and increase the autonomy of economic policy, a reiteration of its previous stance.

Inflation, though, is unlikely to be a key consideration for monetary policy in the near term. The growth outlook -- under pressure from new outbreaks of the Covid-19 variant -- will be a bigger concern that could prompt the People’s Bank of China to do more to support the economy, following a cut in the required reserve ratio in mid-July.

The jump in factory-gate inflation was largely due to higher commodity prices, in particular oil and coal. Beijing has been trying to quell the surge in commodity prices by releasing inventory from the nation’s strategic reserves, cracking down on hoarding and speculation, and ordering state-owned enterprises to limit their exposure to overseas commodities markets.

Core CPI rose 1.3% in July from a year ago, suggesting domestic demand is getting stronger. Food prices declined 3.7% from a year ago, mainly due to a 43.5% plunge in pork prices, a key item in the CPI basket.

“PPI will probably be around 6% by the year-end. This will to some extent limit the room for monetary easing,” said Zhou Hao, senior emerging markets economist at Commerzbank AG in Singapore. “The possibility of a rate cut is extremely small.” 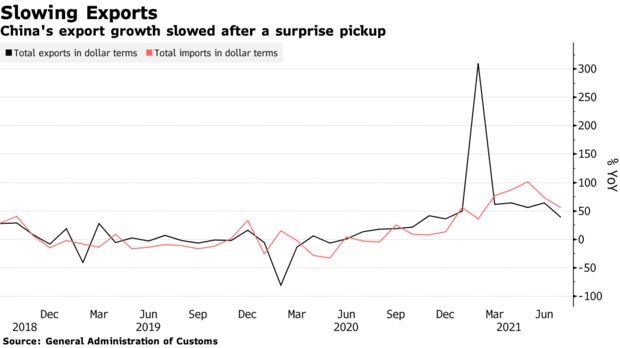 “This puts the policy makers in a dilemma: inflation is rising and growth is slowing,” said Zhang Zhiwei, chief economist at Pinpoint Asset Management. “The pandemic worsened and caused more disruption in the global supply chain.”

China’s zero-tolerance approach to controlling the spread of the virus means more scrutiny on cross-border movement of cargo and travelers, which will probably put further stress on the supply chain, he said.

The government’s target is for GDP growth of more than 6% this year. Zhu Baoliang, the chief economist of a think-tank connected to China’s economic planning agency, forecast growth of about 6.3% and 5% in the third and fourth quarters respectively, and full-year growth of about 8.7%, according to a report in Financial News.

Speculation is rising that the central bank will ease policy again after a surprise move in July to cut the reserve requirement ratio for banks and after the Communist Party’s top leadership pledged more targeted support for the economy at a Politburo meeting late last month.

JPMorgan’s economists see two more RRR cuts of 50 basis points each in October and January, as well as a possible 5 basis-point reduction in the seven-day reverse repurchase rate and the one-year medium-term lending facility rate.

“The pandemic outlook continues to require a close watch,” the economists led by Zhu Haibin wrote in a note Monday. “Sentiment in the financial market remains very fragile and it remains unclear how the recent developments may further unfold and affect private investment and portfolio flows.”