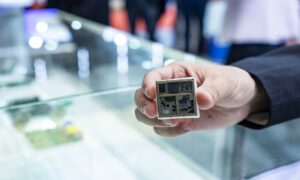 Chinese semiconductor-related stocks soared on Thursday after the announcement of the establishment of a joint China-US working group for the semiconductor industry. Members of the group will work together on information sharing and bilateral communications over trade barriers, supply-chain security and other related issues.

This was another positive sign after SMIC reportedly received licenses to import equipment from certain US companies for use in mature processes earlier this month, a sign of change as US sanctions in the Trump era greatly disrupted the global chip industry.

Through the working group, both sides expect to enhance communication and exchanges, as well as promote deeper mutual understanding and trust, according to the CSIA.

The group will address the concerns of the semiconductor sector on both sides through dialogue and cooperation in accordance with fair competition, intellectual property rights protection and global trade rules, and work together to build a robust and resilient global semiconductor value chain, the statement said.

A source with the CSIA told the Global Times on condition of anonymity on Thursday that both sides will invite industry participants to take part in the group's discussions on timely subjects including trade and technology barriers. Many companies have shown strong interest, said the source.

The working group plans to meet twice a year to share the latest progress in industry technology and trade-restrictive policies between the two giant economies. Based on areas of common concern, they will explore recommendations and identify areas for further study.

This year's working group meeting will be held online, and face-to-face meetings will be held in the future depending on the situation.

The two associations will appoint 10 member companies to participate in the working group to share relevant information and hold discussions, said the CSIA.

China and the US have seen a changing atmosphere for dialogue recently, which analysts said might mean a possible end to the zero-sum game that former US president Donald Trump imposed on foreign policy with China that brought bilateral relations to their lowest level in decades.

China's top diplomats will hold a high-level strategic dialogue with their US counterparts in the US state of Alaska on March 18 and 19 at the invitation of the US side, Chinese Foreign Ministry spokesperson Zhao Lijian confirmed on Thursday.

Industry experts said that the establishment of the working group can be part of the preparations for the upcoming meeting, the first high-level meeting between the two economies since US President Joe Biden took office.

"The broken supply chain between China and the US has severely disrupted businesses on both sides and led to technical challenges for some Chinese companies as well as chip shortages in the US and beyond," Ma Jihua, a veteran industry analyst, told the Global Times on Thursday.

Ma said that from a business perspective, US companies surely expect their technology to be converted into cash in the Chinese market, and the US government's sanctions over supplying semiconductors will only push China to further advance its own supply production chain, which will ultimately make the US companies lose business.

The working group is intended to identify win-win cooperation possibilities and play a part in the decision-making process of the authorities, helping to change the situation from containment to cooperation, experts said.