TOKYO -- China's curbs on carbon-intensive industries and the ensuing energy crisis have scrambled supply and demand calculations for some of the world's key commodities, sending prices on a wild ride that market players say may not yet be over.

Directives from Beijing this year have crashed prices for iron ore and inflated those for aluminum, among others, but disruption in the country's industrial heartland and concern about the property sector leave some predicting more policy swerves.

With the government of President Xi Jinping determined to cut carbon intensity and emissions across industry -- and achieve net zero emissions by 2060 -- "attention will focus on China and how policy evolves from now on," said Tatsufumi Okoshi, a senior economist at Nomura Securities.

A central focus for traders is the steel industry, which has been a main target of environmental policy action and whose fate is tied up with a construction boom that looks in jeopardy. The price of iron ore, steel's main ingredient, surged over 40% between the start of the year and mid-July, only to slump by almost half before a low at the start of this month. 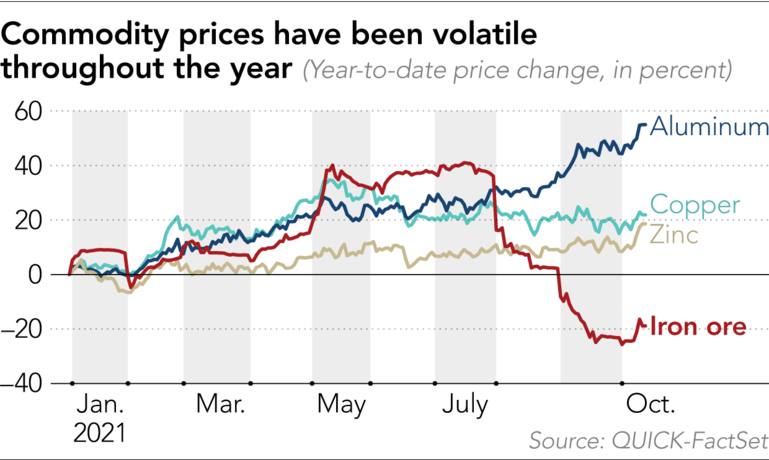 The government earlier this year ordered steel mills to ensure that total output for 2021 remained on par with 2020 levels -- something few believed possible as China's steel production was running at a record high in April.

After the 100th anniversary of the Chinese Communist Party in July, the Chinese authorities started demanding steel mills strictly comply with the target. Output in August was 12% down from a year earlier and was 15% lower than in April, "a decline that would have a significant impact on iron ore," said Atsushi Yamaguchi, analyst at SMBC Nikko Securities. Chinese steel mills will have to keep output at August's depressed level for the rest of the year so as not to exceed 2020 levels.

And the restrictions keep coming. The Ministry of Industry last week asked more steel mills to cut production from Nov. 15 to March 15 next year to achieve the output reduction target. The policy is also designed to prevent air pollution during February's Beijing Winter Olympics and as a response to power shortages.

The use of energy from coal-fired power plants has also been curtailed under environmental rules, via restrictions on industrial electricity use that started to bite late last month, causing a cascade of other effects.

Particularly hard hit is the energy-intensive aluminum industry, suffering from power cuts and coal shortages. Several smelters reduced production and the global benchmark price for the metal -- already elevated because of high global demand -- rose further. It is now up 51% from the beginning of the year.

According to Chinese state-backed research house Antaike, the country's major copper smelters in September kept output flat month on month, as maintenance and curbs on power usage prevented them making more metal. Copper stocks in the warehouses of the London Metal Exchange fell 27% from late August to around 187,000 tons in mid-October.

The crunch is increasingly affecting other raw material industries such as zinc smelters as well as copper and nickel refineries. China is the biggest supplier of major refined metals, accounting for at least one-third of the world's needs in the commodities, so supply strains there usually directly lead to rises in global benchmark prices. Some analysts expect the authorities could widen their energy clampdown. "As we head into winter, if cuts to the aluminum industry do not work, then we could see the curtailments being more widespread," said a copper expert, Nick Pickens, research director at Wood Mackenzie.

Anguish from industry has prompted Beijing to shift policy in some areas, but not necessarily in ways that will reverse the upward pressure on some commodity prices.

Last week, China gave coal-fired power plants more freedom to raise prices, eliminating a disincentive to boost output at a time when high global coal prices have been crimping their profits. Chinese government rules have largely prevented power producers from passing on higher costs to users, but due to this shift, coal-fired electricity prices will be allowed to fluctuate by up to 20% around a peg, compared with a current cap of 10%.

But there are conflicting forces at work as a result of the energy crisis: tight supply but also weak demand.

"It's sort of a double-edged sword," said Sean Mulshaw, principal analyst at Wood Mackenzie, who pointed to the example of nickel, where supply has been restrained due to power cuts but demand for use in stainless steel is weak because of the steel production curbs. "On the one hand, you're taking away demand and on the other, you're taking away supply."

There are other reasons to see weak demand for industrial metals. Honma of Sumitomo said that auto production continues to be curtailed due to the chip shortage. And analysts are nervously watching the crisis surrounding China Evergrande Group, the giant property developer which has stopped paying some of its debts, and the latest data on the Chinese economy, which has shown signs of cooling.

Evergrande's problems could have implications across the property sector. Beijing has spent the past year trying to quell real estate speculation by limiting borrowing by the big developers, with consequences for construction activity. But it has also flooded the financial system with liquidity as Evergrande has teetered, and some analysts have predicted it could ease its pressure on the developers after having proved its resolve and shown that no one company is too big to fail.

China's construction activity accounts for roughly 25% of global steel consumption. Any change in the level of investment would have a huge impact on global iron ore demand.

"The Evergrande crisis may offer a turning point for China that had been conventionally dependent on construction investment for its growth," said Yamaguchi at SMBC Nikko Securities.

One copper trader at a Japanese trading house said investors were left weighing up many unpredictable factors, particularly around energy policy.

"Depending on China's policy, copper consumption is likely to further grow for electric vehicles," the trader said. "But in the short term, energy restrictions... act as downside risks for copper prices. China is not what it used to be, when it was relatively negligent in environmental issues."

Another trader added: "We'll have a volatile market for the time being."

I was very pleased to find this web-site.I wanted to thanks for your time for this wonderful read!! I definitely enjoying every little bit of it and I have you bookmarked to check out new stuff you blog post.