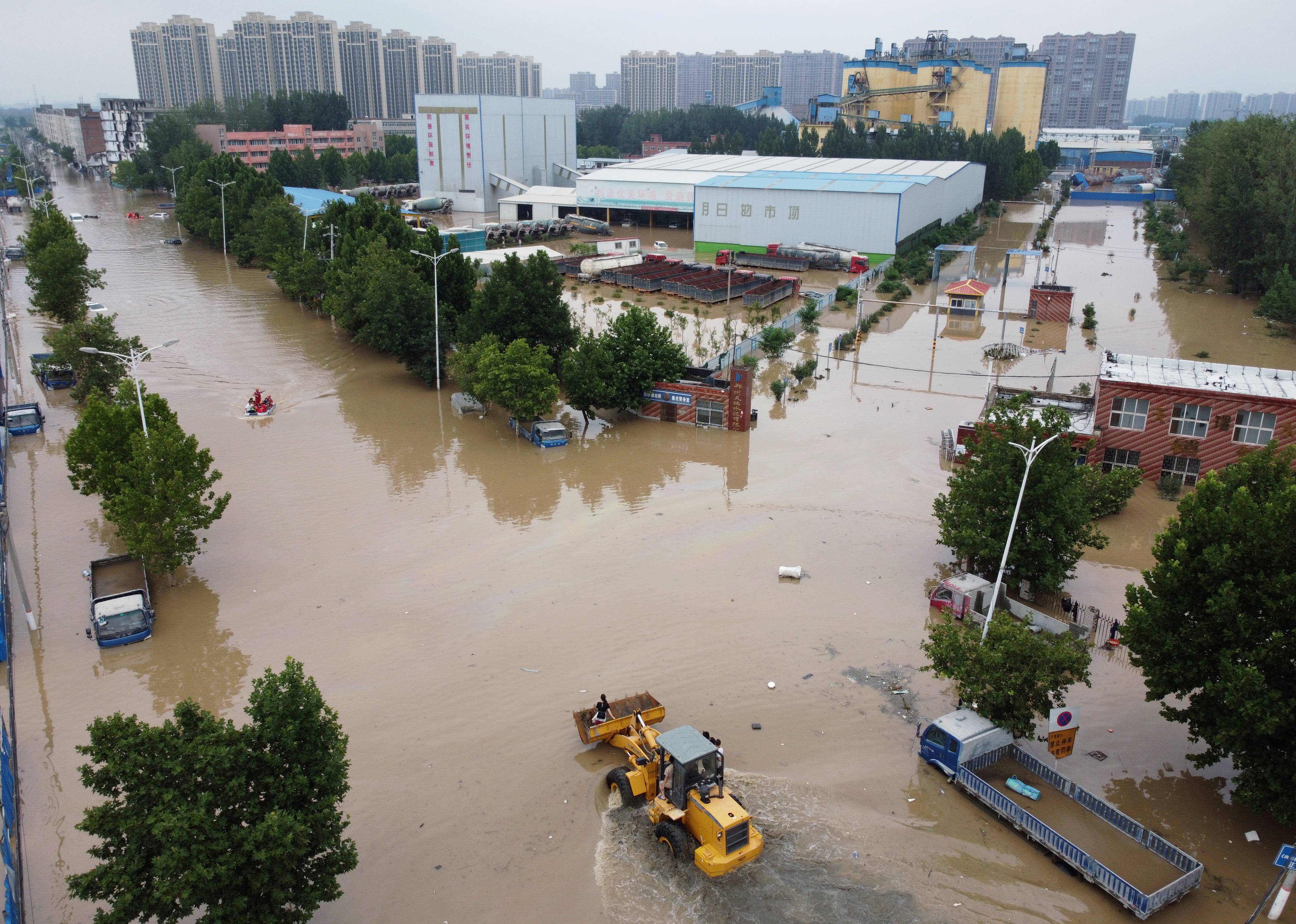 BEIJING, July 22 (Reuters) - The floods drenching central China and submerging swathes of a major economic and transport hub are threatening supply chains for goods ranging from cars and electronics to pigs, peanuts and coal.

Power had been partly restored and some trains and flights were running on Thursday but analysts said disruption could last for several days, pushing up prices and slowing business across densely populated Henan and neighbouring provinces.

Zhengzhou, Henan's capital of 12 million people, 650 km (400 miles) southwest of Beijing, is the junction for the major north-south and east-west high-speed rail lines, with connections to most major Chinese cities from one of Asia's largest stations.

Transport of coal, which generates most of China's power, from top mining regions like Inner Mongolia and Shanxi via Zhengzhou to central and eastern China was "severely impacted", the state planner said on Wednesday, just as power plants scramble for fuel to meet peak summer demand.

"As Zhengzhou is a top national transportation hub and Henan province is a major producer of grains, raw materials and some manufactured products like iPhones, we believe the rainfall and flooding will have a material impact on business activity and inflation in the short term," Nomura analysts wrote.

Foxconn (2317.TW), which makes iPhones for Apple (AAPL.O) at a plant in Zhengzhou, said there has been no direct impact on its main facility.

"We are closely monitoring the situation and will provide any updates as appropriate," it said.

However, a person familiar with the matter said production at a small Foxconn facility that mainly makes desktop connectors in the Zhongmu section of Zhengzhou was affected after some equipment was damaged in the flooding.

The floods poured into subway lines and washed away thousands of cars, killing at least 33 people, cutting road links and knocking out power and cellphone service to many parts of the region.

"We've all been stuck here all day and night," said one driver, tucking into breakfast.

China's largest automaker, SAIC Motor (600104.SS), warned of short-term impact on logistics at its Zhengzhou plant, while Japan's Nissan (7201.T) said production at its factory had been suspended.

The rain snarled transport of pigs to slaughterhouses in one of the country's top pork-producing regions, said a hog trader, and Nomura said food prices in Henan, home to almost 100 million people, and neighbouring provinces could edge up in coming weeks.

The floods could also have a longer-term impact on farm output as rainwater can spread disease on farms.

Heavy rain in the south last year was blamed for a resurgence of African swine fever, which is deadly to hogs.

With more than 200,000 hectares of Henan farmland hit by flooding, SDIC Essence Futures analysts warned of the impact to the maturing peanut crop. Henan produces about a quarter of China's peanuts, a major source of cooking oil.

But the flooding should also trigger the release of pent-up demand for consumption and investment, said the Nomura analysts, especially for cars and infrastructure.

Data from 11 insurers including Ping An Insurance Group (601318.SS), showed they had received claims for almost 32,000 damaged cars in Henan by Thursday.

China Development Bank said on Wednesday it would issue 1.86 billion yuan in emergency loans to the Zhengzhou Metro Group and other local government companies to reinforce drainage and rebuild foundations.