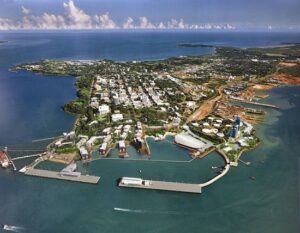 The Australian government is to announce that a new port will be built in the strategically important city of Darwin after the current facilities were leased to a Chinese company, the Australian Broadcasting Corporation reported on Thursday.

It’s unclear whether the new port would be solely for industrial use, or would be a facility that can accommodate visiting naval ships from strategic partners the US and UK, the ABC said. It was understood the announcement would be made in coming weeks by Prime Minister Scott Morrison’s government during the Australian election campaign, it added.

The national broadcaster said Infrastructure Minister Barnaby Joyce issued a statement on Tuesday that the government has earmarked AU$1.5 billion (US$1.1 billion) on new port infrastructure in the Northern Territory, of which Darwin is the capital.

China’s Landbridge Group secured a 99-year lease for Port of Darwin’s commercial operations in 2015 for AU$506 million. The city in Australia’s far north is a naval entry point into the increasingly contested Indo-Pacific region, and is a base for around 2,500 US marines as part of a decade-long security pact with Australia’s key ally.

Since Landbridge’s purchase, which was criticised by then-US President Barack Obama, Australia’s diplomatic and trading relations with the world’s second-largest economy have nosedived amid moves to restrict Chinese investment in critical infrastructure and utilities. Several lawmakers in Morrison’s government have said the port’s Chinese ownership has created a security threat and have called for its forced divestment.

In May 2021, the Minister for Defence Peter Dutton said the Australian government was looking into whether Landbridge should relinquish its lease under a set of strict laws on foreign investment in infrastructure, passed in 2018. Two months before, an Australian parliamentary inquiry had called for the government to consider revoking the lease on national security grounds.

In December, an Australian defence review found there were no national security grounds to overturn the 99-year lease of the Port of Darwin to the Chinese company.